[The following excerpt is from the book, “SO GOOD, SO GOOD, SO GOOD! Confessions of the Piano Dude: A Memoire of Cruise Ship Life, Serial Rapists, Becoming Minimalist, Finding Romance, and Living the Dream“ by Gregg Akkerman.]

The Crimes of the PB Rapist

Kim Caldwell moved aside the greasy wrappers which minutes earlier contained her late-night dinner from Taco Bell. It was two in the morning and time for her to finally go to bed. Her Pacific Beach apartment was noisy, like all beach apartments in that San Diego suburb. But she nodded off soon enough. In the dim world of half-sleep, there was a threatening sound coming from the window. A dark shadow where there should be none. And the sudden awareness that a hooded figure was coming for her.

The next hour was spent being raped at knife-point by the man referred to locally as the “PB Rapist.” Kim realized she was in the throes of becoming victim number seven to the assailant who had been in the headlines for months. Although she keenly suffered the agony of each moment, Kim was able to accomplish something the first six had not. She saw opportunity to be the end of this man above her. She studied his eyes, his breathing, his speech, his carriage. And when finally free of his clutch, she treated her body as a crime scene not to be disturbed more than necessary. She would not become a number. Instead, she would become his ruin.

The San Diego Music Scene in the 1990s

San Diego in the early 1990s was at the center of a growing musical movement. Tired of low-paying jazz gigs, many of the area musicians began creating a new genre. They blended the jazz improvisation they loved with the sensibility of the soul and funk music they grew up with. More akin to instrumental pop music than traditional jazz, this new style quickly sprouted a healthy following.

Fair-weathered San Diego was especially well-suited for the rise of “smooth” jazz. Soon, it seemed every music venue in the county featured performances sponsored by the “Light’s Out” radio station, 92.7-FM. Local performers were now able to make good money playing music they could still consider jazz.

The Rise of Dr. Chico

Vocalist Kenneth Bogard, known simply as “Bogie,” saw the potential for combining the rhythms of reggae music with smooth jazz. He eventually created a unique style of music with his band, “Dr. Chico’s Island Sounds.” They became a San Diego mainstay and worked solidly every week. I saw them several times at some of the nicest venues in town. Being a musician primarily involved with the local blues scene, I envied their bookings and remuneration.

At the height of Dr. Chico’s popularity, I got an unexpected phone call from their singer. “Eh mon, my name is Bogie and I need a keyboardist for a few gigs. Are you interested?” Not hearing an immediate response from me, Bogie continued. “My regular guy needs a couple weeks off so we need a sub for some gigs in Mission Valley.” If I could land the gig with Island Sounds, even temporarily, my credibility among musicians in town would quickly rise. So I tried to answer in a tone that sounded interested but not desperate. “Sounds fun.”

A couple days later, Bogie showed up at my place with a guitar case slung over his shoulder and holding a small amp. He wore a headband that highlighted his short but spiky blond hair (think lead vocalist of Loverboy singing “Everybody’s workin’ for the weekend”). His grin of slightly crooked teeth bordered on dopey, but my first impression was to like the guy. I already respected him as a musician and was quickly drawn to his laid-back style, so what was not to like?

We set up in my bedroom and played through a few tunes from his usual set-list. My ego would love to recall how we easily blended our styles and knew within the first chorus we had found a long-lost musical brother. But it just didn’t happen. The syncopation he was used to just didn’t feel natural to me. I plodded roughly through our first rehearsal and within fifteen minutes knew there would not be a second. I started looking around the room pondering how to extract myself from the situation and was moments away from feigning excruciating gas pains. In a moment of blissful co-understanding, Bogie asked, “You like Thai food?” Within minutes our gear was packed and we were headed over to the Copper Dragon on University Avenue.

“You’ve got to try the lemon-grass chicken. It’s wicked good.” I took Bogie’s suggestion and also ordered a pot of green tea for us to share. This was working out after all. Even if we weren’t to become serious musical partners, at least we could cross paths in the future with no awkward moments pretending not to see each other. As he hungrily cut into his breast meat we chatted about the local music scene. He graciously referred me to a percussionist friend named Biter who was looking for a keyboardist.

After enjoying the rest of our conversation and meal, I took a final sip from the tea cup, and we rose to say our goodbyes. He picked up the tab and I laid down a tip. We waved goodbye with him pulling away in an undistinguished sedan and me on my Yamaha. Except for some upcoming appearances on local television, I never saw the man again.

San Diego State University, usually called “State” by its 35,000 students, was one hell of a fun school back then. Playboy magazine rated it as the third-best party school in the nation which quickly gave rise to t-shirts and bumper stickers proclaiming, “#3 and Improving.” The riotous student life necessitated an active University police force that spent considerable hours patrolling the well-attended neighborhood parties.

The school cops were specifically on the hunt for a flasher who had been accosting females as they left parties alone. He had been nick-named “Zorro” due to the Lone Ranger-style mask used to cover his face. Eventually, one of these women thought she recognized Zorro as a popular San Diego singer. But without more evidence, the campus police could only watch and wait for the man they now suspected was Kenneth Bogard to make a mistake as the masked flasher.

Meanwhile, an eighth attack was in the news. The PB Rapist struck again except, instead of his usual ski mask, this time he wore a Zorro mask. At first the city police thought it might have been an inaccurate copy-cat. But the SDSU cops thought differently and turned over a name from their pervert files. Using a ruse, San Diego police convinced Bogard to provide a saliva swab to clear him in a case he knew he had nothing to do with. Still a new forensic tool at the time, Bogie had not considered that one of his victims had the presence of mind to collect his DNA after he raped and terrified her.

The Capture of the PB Rapist

“Son of a BITCH,” I said out loud when I saw the news on TV. The police had arrested their number one suspect as the PB Rapist. It was the same guy I had shared a pleasant meal with only a month before. Eventually, Kim Caldwell’s evidence and brutally accurate court testimony was convincing enough to gain not only a guilty verdict on 36 charges but a 96-year sentence for the PB Rapist, Kenneth Bogard.

About a year after the conviction I picked up Biter so we could share a ride to a gig playing in a musical theater pit band. I had followed up on Bogie’s recommendation, and Biter and I had played several gigs together before this one came along. As we drove south on I-805 towards Chula Vista, I turned on the radio to hear the top-of-the-hour local news. The announcer commented how Kim Caldwell was continuing the fight for rape-victim advocacy. During the PB Rapist case she had fought hard to embarrass the city into creating a rape task force, and now she was using her clout to further the rights of women often too afraid to speak out for themselves.

I was thinking to myself, “That woman is awesome,” and was about to verbalize my thoughts when Biter vehemently interjected. “Fucking Kim Caldwell! That bitch should just shut up and go away. I can’t believe what she’s done to Bogie.” I asked him to explain how any of this wasn’t Bogie’s own fault, but his response was only hate-filled muttering. That was the last gig ever I played with Biter.

As for Bogie, after two failed appeal attempts, he will be in his eighties before he can be considered for parole.

Earlier versions of this account were originally posted on a blog several years ago. Since all the events happened pre-internet, there isn’t much information about the PB Rapist online, so a Google search leads to my article, and several people have reached out to me. Most of the responses fall into the category of, “I use to know/date/perform with Bogie; he was nice to me, but what a creep he turned out to be.”

Two of the respondents, however, truly caught me off guard: Kim Caldwell herself and, even more surprisingly, I heard from Bogie, although indirectly. That communication is detailed in the full book. 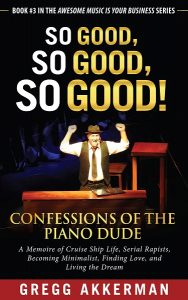 One thought on “The PB Rapist: The Crimes and Capture of America’s Most Twisted Musician Serial Rapist (book excerpt)”

Why Does My Wife…?